Esencias Panameñas will combine menu variety, ambiance, and friendly staff to create a sense of "place" in order to reach its goal of overall value in the dining/entertainment experience. Its main focus will be to serve a large selection of quality and freshly-prepared authentic Panamanian meals with healthy ingredients in a simple, straightforward manner at a great price. 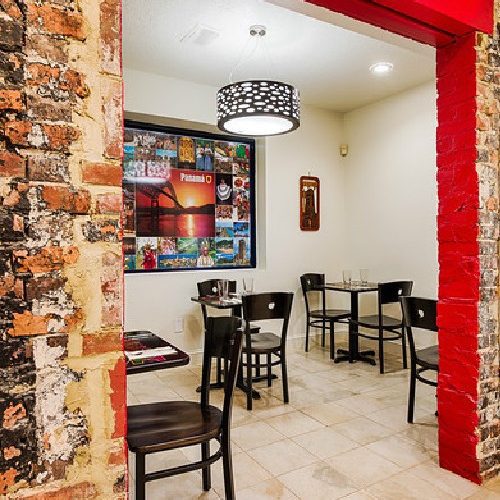 Esencias Panameñas refers to the distinctive Panamanian Spices that cause a unique aroma and flavor that is as pleasing to the senses as it is to the palate. Panama's key spice is "culantro" (not cilantro), as shown in the picture to the left. Culantro is a tropical perennial in the Apiaceae family that is widely used as a seasoning in many of our dishes. It is native to Central and South America and is not well known in the United States.

An Afro Latina native of Panama City, Panama, Yadira Stamp realized her passion for the culinary arts at an early age, assisting her caterer mother in the kitchen as she prepared meals for her clients. Her first dream, however, was to become an Astronaut - a profession that back then was considered for "men only," and because of her determination, she attended an all-boys high school in Panama, against her mother's wish; graduated 2nd in her class, and obtained a full scholarship. In 1980, she moved to Washington, DC, and stayed with family while attending the University. In 1982 she became homeless for choosing to stay in school. But even that did not stop her from graduating. Thanks to the help of strangers, she was able to get back on her feet and went on to obtain an Electrical Engineering Degree in pursuit of her dream, but the apprenticeship program at NASA was abolished, and she decided to switch to becoming a Technical Analyst and Designer, which she did for 32 years.

Because her culinary interest never waned, she began her epicurean journey in 2009 at the Art Institute of Washington in Virginia, where she graduated cum laude. Rather than going to France for her externship, she opted to return to Panama, where she spent three (3) months at the hands of culinary matriarchs in the countryside, who taught her about the wonderful world of the native Panamanian gastronomy. She is certified by the American Culinary Federation as a Certified Executive Chef (CEC). Chef Yadira is an Executive Chef, Caterer, Instructor, speaker, restaurateur, and culinarian. When it comes to food, she specializes in global cuisine, which encapsulates the flavors of Panama, the Caribbean, and South America.

Over the past 30 years, Chef Yadira has maintained a "pay it forward" mantra and has spent much of her career volunteering, mentoring, performing cooking demonstrations, and serving culinary creations throughout the Washington Metro Area. She has performed cooking demonstrations at the Farm-to-Street Party, as part of the 'Eat Local First Week', as well as during 'Growing Healthy Schools Month,' which celebrated the DC Healthy Schools initiative that was launched by First Lady Michelle Obama in public schools throughout the District of Columbia.

On July 20, 2014, Chef Yadira's dream of becoming a Restaurateur finally came to fruition. She opened Esencias Panameñas Restaurant & Catering in Washington, DC, where she prepared and served authentic Panamanian and Caribbean dishes and beverages. However, due to gentrification, Esencias Panameñas Restaurant & Catering, in Washington, DC – winner of the 2017 and 2018 Best of DC – Best Latin American Restaurant, closed its doors to the public on December 31, 2018. But she continues to provide catering services.

She is a member of Chef Jose Andres' World Central Kitchen (WCK) Chefs network; volunteers with ‘N Street Village,’ No Kid Hungry DC, and Washington, DC Capital Area Food Bank; and has participated in the Ovarian Cancer National Alliance Organization's annual "Turn Up the Heat: A Celebration of Women Chefs" event, the Metropolitan Cooking & Entertaining Show, where she assisted in the preparation of the food presented by The Neelys and Paula Deen, and the Congressional Black Caucus 47th Annual Legislative Conference.

In celebration of 'Hispanic Heritage Month,' she's been called upon to speak about food policy, and to cater events at the AARP Organization, NBC4 News, Montgomery County Park and Planning Commission, the USDA, and the FDA. In 2018, Panama qualified for the finals of the FIFA World Cup, and she was featured on FOX 5 Good Day DC, on Telemundo, which telecasted the game live from the Restaurant, as well as in the Washington Post and the New Yorker newspapers, and on the WTOP radio. She has also been featured in online magazines and several blogs, both in Panama City, Panama, and the DC Metropolitan Area.

Chef Yadira resides in the D.C. metro area. She is currently working on her first cookbook, Panama on a Plate: Favorite Foods from my Birthplace, to be release November 2022.  She is also developing a signature line of carimañolas to be sold in stores nationwide. In addition to cooking, she enjoys culinary reading, research, and experiment, as well as supporting various philanthropic organizations in her community. Her resilience and determination, combined with her polished culinary skills and the courage to follow her dreams, despite her many adversities, have proved to be the right ingredient for success.